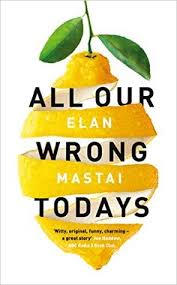 When Tom loses the love of his life, time travel seems like the only answer. . . what could possibly go wrong?

So, the thing is, I come from the world we were supposed to have.

That means nothing to you, obviously, because you live here, in the crappy world we do have.

But it never should’ve turned out like this. And it’s all my fault – well, me and to a lesser extent my father.

And, yeah, I guess a little bit Penelope.

In both worlds, she’s the love of my life. But only a single version of her can exist.

I have one impossible chance to fix history’s greatest mistake and save this broken world.

Tom lives in a different 2016. A better 2016 than the one we had (which, to be honest, isn’t that difficult), made possible by a never-ending source of clean energy discovered in the 1950s. Tom’s world is peaceful, carefree, perfect. But his life isn’t. His father, a brilliant scientist, is distant and disinterested. Tom feels like a failure.

It’s quite a complicated plot, but suffice it to say, Tom messes with his father’s time machine, changes the course of history and ends up in our, rather crappy, 2016.

The concepts behind time travel give me a headache. I just can’t get my head around the whole idea. And neither can Tom, really. But he has to sort things out to save all those people he accidentally got rid of. Of course, it isn’t that simple. There’s his new family to consider, who are much nicer that the old one. And there’s the new Penelope too.

Tom is a great main character. Aware of his short-comings, he’s an honest narrator. The reader really feels his panic about what he’s done, the dawning reality of where he is and what his new life means. The journal style works very well and does help the reader to identify closely with Tom. The other characters are, on the whole, also well-drawn and three-dimensional and the author allows their flaws to show. The novel explores his complex relationships, and at the heart of this is a love story.

There are a few places where things are a little repetitive and long-winded, but they are few and far between. And I did feel that new Penelope was rather too perfect. But aside from these minor points, the novel was clever, well-written and very readable despite its complexity.

Thanks to NetGalley and the publisher for a review copy.