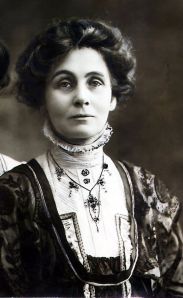 Today would have been the birthday of Emmeline Pankhurst, leader of the suffragette movement in Britain, lathough the woman herself did not believe this day to actually be her birthday. She always maintained that she had in fact been born a day earlier, on the 14th July – Bastille Day. Various books about her, including some written by her children, repeat this claim. Bastille Day would indeed have made an appropriate birthday, and Emmeline is said to have felt an affinity with the female revolutionaries who stormed the Bastille. In June Purvis’ 2002 biography, she is quoted as saying: “I have always thought that the fact that I was born on that day had some kind of influence over my life.”

Whether or not today is actually her 156th birthday, it is still an excuse, if one were needed, to celebrate the life of a remarkable woman to whom all women should be grateful. It is easy to forget that it was less than 100 years ago that woman were given the right to vote. If it hadn’t been for Emmeline Pankhurst, the fight might have taken a lot longer. And if you think suffragettes were like the rather dizzy mother portrayed in ‘Mary Poppins’ then think again; Emmeline and her colleagues were made of much sterner stuff, and the suffragette movement was no Disneyesque fantasy.

Emmeline was born in Moss Side, Manchester to politically active parents. This may have had some bearing on her own political views, as may have the French finishing school she later attended. The headmistress there believed that girls’ education was just as important as boys’ and subjects such as chemistry and book keeping were taught alongside the more traditional ‘female’ subjects.

Emmeline married at the age of twenty. Her husband, Dr Richard Pankhurst, a lawyer, was twenty four years older. He was a radical and a socialist and believed in women’s rights. The couple had five children. All their daughters, including Christabel, became active in the women’s’ suffrage movement with their mother.

It was Emmeline who founded the Women’s Social and Political Union (WSPU) a group dedicated to practical activism in order to obtain equal voting rights for woman. The group’s motto was ‘Deeds not Words’ and it gained a reputation for its tactics – these involved demonstrations, cutting telephone lines, destroying greenhouses at Kew Gardens and chaining themselves to railings. Many women were arrested and imprisoned, Emmeline amongst them. In Holloway, Emmeline staged her first hunger strike in an attempt to improve conditions for the other suffragettes imprisoned there. Other activists followed suit, and force-feeding began. Emmeline was spared this trauma however. As she recounts in her biography ‘My Own Story’, when officers tried to enter her cell, she held a clay jug over her head, threatening to defend herself.

Emmeline continued to break the law, continued to be imprisoned and continued to go on hunger strike, a process that proved extremely detrimental to her health. However, the First World War put a stop to the movement’s activities, and Emmeline threw herself into helping the war effort. She organised rallies, gave speeches and lobbied the government on the issue of helping women to enter the workforce in order to fill gaps left by fighting men. She also became involved in helping ‘war babies’; those children born to single mothers whose fathers were away fighting.
With the end of the war came the 1918 Representation of the People Act which granted the vote to certain women over the age of thirty.

Emmeline continued to be involved with politics. Surprisingly to some, she joined the Conservative Party in 1926 and was selected as a candidate for Whitechapel and St George in 1928. However, her health had been impacted by her frequent incarcerations and hunger strikes and she died that same year at the age of 69. Just eighteen days later, Parliament passed the Representation of the People (equal franchise) Act 1928, giving the vote to all women over the age of twenty-one regardless of property ownership. Finally, women had equality with men in terms of voting. It was a shame that Emmeline, after devoting her life and sacrificing her health to the cause, never got to see her dream fully realised.