There’s something about a cold day in December, the sky growing dark, the fire lit, candles glowing, a glass of red wine and a good book. Christmas is approaching and it’s already the shortest day. I’ve always been fascinated at the old traditions and history of the seasons and festivals, particularly those destroyed by religion. And the Winter Solstice has something really magical about it.

The Winter Solstice is the shortest day of the year – the day that has the shortest periods of daylight. It’s always been a cause for celebration because it means that we’ve reached a turning point – that the days will slowly get longer and we’re on our way to spring (even if it doesn’t feel like it). Our ancestors always knew how to throw a celebration and the winter solstice was a great excuse. There are some fascinating traditions associated with the point of midwinter and many of them have been stolen to become part of Christmas. It’s wonderful that some traditions have been revived and some new ones are beginning.

A relatively new tradition, this began in 1993, but has its roots in the idea of lengthening days and shortening nights.

A procession of lanterns and costumes, all bearing a clock face, makes its way through the streets and down to the seafront. Here, the paper and willow lantern are burnt – the lantern makers make wishes, voice their hopes and fears, and pass them into the lanterns before they are placed into the fire. 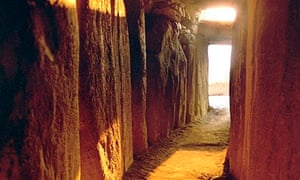 Newgrange is a 5200-year-old passage tomb built by stone age farmers. Above the entrance is an opening, On mornings around the winter solstice, a beam of light penetrates the opening and travels up the passage, illuminating it and the chamber. As the sun rises, the whole chamber lights up dramatically. 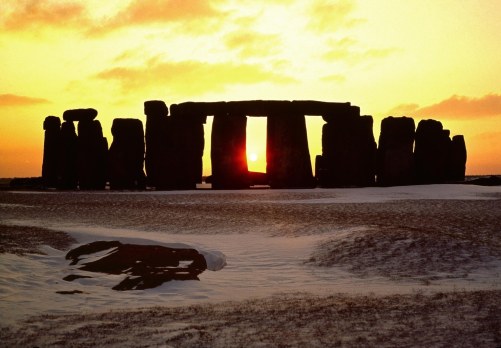 Druids and pagans gather at Stonehenge for both the summer and winter solstices. At the summer solstice, the sun rises behind the Heel Stone. At winter solstice, the sun would have set between the narrow gap of the uprights of the tallest trilithon, which is no longer standing. The sun was so important to our ancestors, providing warmth, allowing crops to grow. They must have had such fear and respect for the earth, the sun, the moon and the power of nature, something we sadly lack.

The Montol Festival in Penzance is a revival of many of the traditional Cornish Midwinter customs. There is Guise dancing, (from ‘disguise’ – dancers hide their identity so they can get up to mischief!) the Cornish candle dance, and performances of Guiser plays.

Midwinter, while sometimes viewed as dark and depressing, can be a really magical time. So much of our history and heritage is in the traditions that pre-date religion. While there’s a lot of noise around the fears that Christmas is being overly secularised, it’s worth bearing in mind that winter has long been a time of festivals and traditions since long before Christmas. So here’s wishing you a happy, healthy Winter Solstice – and let’s look forward to the lengthening days ahead. 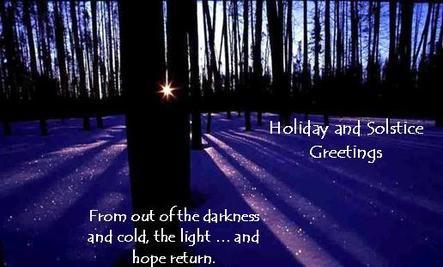 Here’s a post from a few years ago – it’s a beautiful day today for the summer solstice.

‘As the sun spirals its longest dance, cleanse us.

As nature shows bounty and fertility bless us.

Let all things live with loving intent and to fulfil their truest destiny.’

Were you up early this morning watching the sun rise? If you were, you were joining hundreds of other people marking this year’s summer solstice.

The summer solstice happens when the tilt of the Earth’s semi-axis is most inclined towards the sun. In fact, the word ‘solstice’ derives from the Latin ‘solstitium’ which translates as ‘sun stands still’. On this day there are the most hours of sunlight.

Humans have long been amazed by the power of the sun and light has a key role in many rituals, beliefs and superstitions. For Pagans in particular, this day has a particular significance. They believe that the Goddess (who they worship along with the horned God) took over the earth at the beginning of spring. The solstice marks the day when she is at her most powerful. Some Pagans believe the day marks the marriage of the Goddess and God – their union creating the abundance of the harvest.

Although they come together to celebrate life and growth at the time of the solstice, Pagans also recognise that the sun will now begin to decline, days will slowly get shorter, and we will edge slowly towards winter.

If you live in the UK, then you probably associate the summer solstice with Stonehenge. Many Pagans and, indeed, non-Pagans, gather at this ancient stone circle to watch the sun rise. The Heel Stone and the Slaughter Stone are set just outside the main circle, and these stones align with the rising sun.

Although Stonehenge is the focal point for many, Pagans will gather outdoors to take part in rituals and celebrations that date back for thousands of years. These traditions have largely been forgotten or are now overlooked, but it is worth remembering that, although many were wiped from the history books once Christianity took hold, these ancient rites and beliefs were here long before the relatively modern Christian tradition. Because of the passage of time, and also because of the banning of many traditions and beliefs under Christianity, there is not much documented evidence of traditional celebrations marking Litha, or Midsummer, of which the Solstice is a part. There is some information to be found however; some of it, ironically, in the writings of monks.

One tradition that is known about is that of setting large wheels on fire and then rolling them down a hill into water. This may have been used to signify the fact that although the sun is strongest in midsummer, it will then weaken. Water also reduces the heat of the sun; subordinating heat (the fire) to water signified the prevention of drought. 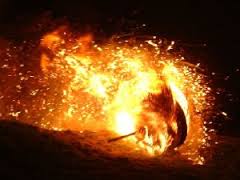 The setting of hilltop bonfires was also a midsummer’s tradition, again linking fire to the sun and honouring the space between the earth and the sun. This tradition was brought to the British Isles by Saxon invaders celebrating the power of the sun over darkness.

Pagans today see the solstice as a time for focusing on inner lightness and power. Whatever your beliefs, getting up early on the morning of the summer solstice and watching the sun rise is sure to fill you with awe. It’s a tradition we should probably all embrace.