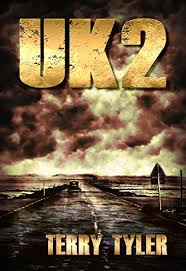 ‘Two decades of social media had prepared them well for UK2.’

The pace steps up in this penultimate book in the Project Renova series, as the survivors’ way of life comes under threat.

Two years after the viral outbreak, representatives from UK Central arrive at Lindisfarne to tell the islanders about the shiny new city being created down south.  UK2 governor Verlander’s plan is simple: all independent communities are to be dissolved, their inhabitants to reside in approved colonies.  Alas, those who relocate soon suspect that the promises of a bright tomorrow are nothing but smoke and mirrors, as great opportunities turn into broken dreams, and dangerous journeys provide the only hope of freedom.

Meanwhile, far away in the southern hemisphere, a new terror is gathering momentum…

I read the previous two novels in this series ages ago and thoroughly enjoyed them both, and this third in the series certainly doesn’t disappoint.

I was worried I wouldn’t remember the ins and outs of the story, but I was back in this fabulously crafted dystopian world within a few pages, catching up with lovely Lottie (such a well-drawn character), her mum Vicky, dastardly Dex, poor little princess Flora and a cast of other, equally strong characters.

What works really well here is the dawning realisation of each of the characters that things aren’t what they seem. After everything that’s happened, they’re still hanging on to the idea that someone in charge will make it all go away, that someone else will sort it out and make them feel safe. The way each of them deals with the truth is so compelling, and it’s also what makes this book such a delight to read – it’s not difficult at all to imagine this happening.

My favourite storyline was Flora’s. She is so annoying, but I have a lot of sympathy for her. I have a sneaking suspicion I’d be a terrible wimp in similar circumstances, and to see her character develop the way it does is one of the highlights of the story.

As always with Terry Tyler’s novels, you get a great, believable storyline, and well-crafted, compelling characters. This is essentially about people, and how they cope in dreadful circumstances – and it’s written with real skill. The author is a natural storyteller, and her books never disappoint.

I won’t be leaving it as long to read ‘Legacy’!