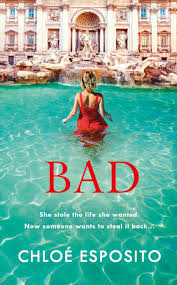 She stole the life she wanted. Now someone wants to steal it back . . .

Alvie Knightly may be waking up in the Ritz, but her life is no bed of roses.

Firstly, she has the mother of all hangovers.

Secondly, her beautiful, spoiled twin sister Beth has just been found dead in Sicily – and the police want Alvie for questioning.

And thirdly, Alvie’s hot new boyfriend has vanished with every penny of the millions they stole from Beth.

But he picked the wrong girl to mess with.

Alvie will pursue her ex to Rome in a game of cat and mouse that only one of them can survive.

But can Alvie get revenge before her crimes catch up with her?

I absolutely loved the first in this trilogy so was so looking forward to this one. The first book, ‘Mad’, is funny, weird, different, and Alvie is all of these things too. Unfortunately, I didn’t enjoy ‘Bad’ nearly as much.

The things that happen in ‘Mad’ work so well because they are shocking and unexpected and you can’t quite believe the things that Alvie gets up to. In ‘Bad’ it’s either more of the same (so it’s no longer a shock) or things are just ridiculously out there, so much so that it doesn’t feel as funny or as compelling.

There are some really funny moments, and I do love the author’s writing style. It just all felt a bit ‘samey’.

It’s a real shame, because I think Alvie has so much potential – she’s so different to all those wishy-washy female characters out there. I’m hoping this is just a glitch though, and I will give the third book a go. I just hope the Alvie we know and love is back to her mad, bad and dangerous best.