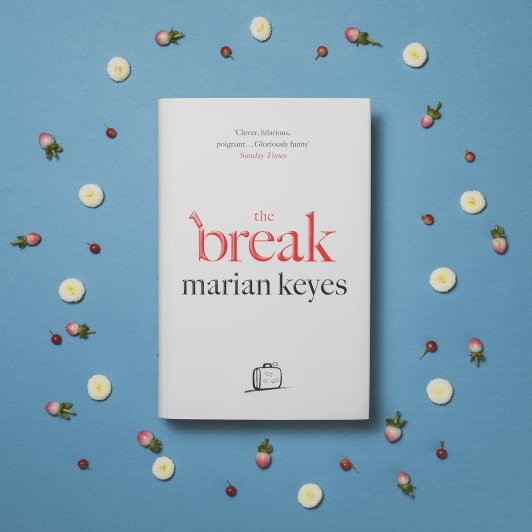 Amy’s husband Hugh has run away to ‘find himself’. But will he ever come back?‘Myself and Hugh . . . We’re taking a break.’
‘A city-with-fancy-food sort of break?’

He still loves her, he’s just taking a break – from their marriage, their children and, most of all, from their life together. Six months to lose himself in South East Asia. And there is nothing Amy can say or do about it.

However, for Amy it’s enough to send her – along with her extended family of gossips, misfits and troublemakers – teetering over the edge.

For a lot can happen in six-months. When Hugh returns, if he returns, will he be the same man she married? Will Amy be the same woman?

Because if Hugh is on a break from their marriage, then so is she . . .

The Break is a story about the choices we make and how those choices help to make us. It is Marian Keyes at her funniest, wisest and brilliant best.

I’ve read a lot of books by this author but not for a few years. I’m not sure why – they just haven’t been on my radar for some reason. So I was really looking forward to reading this. I remember from previous books lots of funny, real women, with real lives and believable problems. And this does deliver – some of the time. But it just misses the mark for me.

I really like Amy, and really enjoyed the antics of her Irish family – something that Keyes always writes so well. I thought Amy was well-drawn and her reactions to Hugh’s bombshell were very realistic. I felt so angry with him, but as the narrative progressed, I began to feel a little bit of sympathy. And I think it’s a real strength of the book that Amy isn’t completely blameless.

There are some great characters here, and lots of really interesting and entertaining side plots. And Amy’s relationship with her daughters and niece, and their relationships with each other bring a real warmth to the story.

I see that the author has been criticised by some reviewers for the storyline around abortion. I thought this was really well done – sensitively handled and not at all preachy. Travelling to England for an abortion is the reality for many women in Ireland – it actually happens, and the consequences can be dreadful. Well done to the author for showing what this is like. Novels should highlight the social and political issues of the time and place in which they are set – and any story set in Dublin that has female characters of child-bearing age surely is the place to show what this can be like. There has always been an edge to Marian Keyes’ work that lifts it above other novels in the genre – and that is what she has done here.

So great characters, great storylines and lots of fun and drama, but it was just a bot too long. And I really didn’t like the epilogue. It was too much, and I think the book would have been stronger without it.

It is definitely worth a read though, and I do recommend it.

Thanks to NetGalley and the publisher for the review copy.