When Tom loses the love of his life, time travel seems like the only answer. . . what could possibly go wrong?

So, the thing is, I come from the world we were supposed to have.

That means nothing to you, obviously, because you live here, in the crappy world we do have.

But it never should’ve turned out like this. And it’s all my fault – well, me and to a lesser extent my father.

And, yeah, I guess a little bit Penelope.

In both worlds, she’s the love of my life. But only a single version of her can exist.

I have one impossible chance to fix history’s greatest mistake and save this broken world.

Tom lives in a different 2016. A better 2016 than the one we had (which, to be honest, isn’t that difficult), made possible by a never-ending source of clean energy discovered in the 1950s. Tom’s world is peaceful, carefree, perfect. But his life isn’t. His father, a brilliant scientist, is distant and disinterested. Tom feels like a failure.

It’s quite a complicated plot, but suffice it to say, Tom messes with his father’s time machine, changes the course of history and ends up in our, rather crappy, 2016.

The concepts behind time travel give me a headache. I just can’t get my head around the whole idea. And neither can Tom, really. But he has to sort things out to save all those people he accidentally got rid of. Of course, it isn’t that simple. There’s his new family to consider, who are much nicer that the old one. And there’s the new Penelope too.

Tom is a great main character. Aware of his short-comings, he’s an honest narrator. The reader really feels his panic about what he’s done, the dawning reality of where he is and what his new life means. The journal style works very well and does help the reader to identify closely with Tom. The other characters are, on the whole, also well-drawn and three-dimensional and the author allows their flaws to show. The novel explores his complex relationships, and at the heart of this is a love story.

There are a few places where things are a little repetitive and long-winded, but they are few and far between. And I did feel that new Penelope was rather too perfect. But aside from these minor points, the novel was clever, well-written and very readable despite its complexity.

Thanks to NetGalley and the publisher for a review copy.

There is a myth in our culture that to find meaning you have to travel to a distant monastery or wade through dusty volumes to figure out life’s great secret. The truth is, there are untapped sources of meaning all around us: right here, right now. Drawing on the latest research in positive psychology; on insights from George Eliot, Viktor Frankl, Aristotle, the Buddha and other great minds, Emily Esfahani Smith identifies four pillars upon which meaning rests: Belonging, Purpose, Storytelling and Transcendence.

She also explores how we can begin to build a culture of meaning into our families, our workplaces and our communities.

Inspiring and full of contemporary examples, The Power of Meaning will strike a profound chord in anyone seeking a richer, more satisfying life.

I have to admit that I’m not really a great fan of the whole idea of ‘self-help’, mainly because I feel it over-simplifies complex mental health issues and trivialises them. However, I was intrigued by the premise of this book.

It is very well-written and there is a great deal of very interesting stuff here. The idea of a life that means something being far more important that a fruitless search for happiness did strike a chord with me. I found the opening chapters, with the inclusion of ideas from many psychologists, philosophers, and thinkers the most interesting and though-provoking part of the book.

The idea here is that it is important to find meaning in whatever you do, and that connections to others are vital to living a life that means something. The author backs up this theory with lots of research and references and also with anecdotal evidence.

The book lost it for me though when it went on to discuss the four pillars central to a life of meaning, and to look at real-life examples. For me, the references to religion, while not the central theme here, left me cold, and I did feel some of the accounts were rather biased and one-sided. It was a little simplistic.

This book was very well researched and referenced, and the premise is a strong one – being part of a community and feeling that you matter, and connections with others certainly are good for mental health and well-being and these ideas will help people. However, living with mental health issues is much more complex than this.

So this didn’t work for me. I found some of it very interesting, and the idea of a meaningful life is one that does resonate, but, on the whole, this wasn’t for me.

Thanks to NetGalley and the publisher for a copy for review.

My review of ‘Inside of Me’ for #RBRT

Today’s team review is from Alison, she blogs at https://alisonwilliamswriting.wordpress.com/

Alison has been reading Inside Of Me by Hazel McHaffie 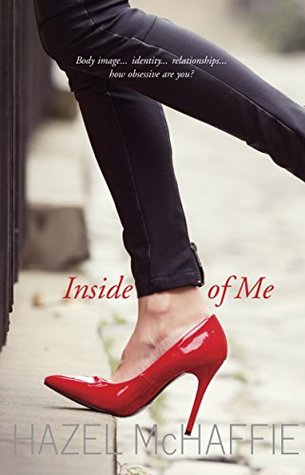 This is a very interesting novel, with an intelligent and thoughtful storyline and some well-crafted and believable characters. The subject matter covers many areas of body image, identity, gender and family relationships, in a very sympathetic way. The dynamics of family are well-portrayed and the prejudices, preconceptions and misconceptions we have about others, even those we are closest to, are well-drawn and feel authentic.

India has many of the attributes of a typical teenage girl, who turns angry, confused, needing her parents but needing her independence too. There were times however, when I wanted to feel more sympathy for her, but found this difficult because of the way she treated her mother. And while I appreciate that many girls of this age have conflicts like this with their mothers…

All eleven-year-old Tanya Randall wants is a happy family. But Mum does nothing besides housework, Dad’s always down the pub and Nanna Purvis moans at everyone except her dog. Then Shelley arrives –– the miracle baby who fuses the Randall family in love for their little gumnut blossom.

Tanya’s life gets even better when she meets an uncle she didn’t know she had. He tells her she’s beautiful and could be a model. Her family refuses to talk about him. But that’s okay, it’s their little secret.

Then one blistering summer day tragedy strikes, and the surrounding mystery and suspicion tear apart this fragile family web.

Embracing the social changes of 1970s Australia, against a backdrop of native fauna and flora, The Silent Kookaburra is a haunting exploration of the blessings, curses and tyranny of memory.

Unsettling psychological suspense blending the intensity of Wally Lamb with the atmosphere of Peter James, this story will get under your skin.

This is a really well-written and absorbing story. Set in 1970s small-town Australia it centres on Tanya – an unhappy child, overweight, bullied at school and trying to cope with her mother who has been devastated by a series of miscarriages. Her father loves her, but he doesn’t cope either, seeking solace far too often in the local pub, and her grandmother, Nanna Purvis, is a hard woman, although her kindness shines through as the novel progresses.

When her mum finally gives birth to a daughter, Tanya thinks things will be fine, but problems with baby Shelley’s health, cracks in her parents’ marriage and the arrival on the scene of creepy Uncle Blackie mean that Tanya has much more to deal with than she can cope with.

And things only get worse.

But this isn’t a miserable story. Yes, some parts are uncomfortable to read. I wanted to whisk poor Tanya away and give her a cuddle and a decent meal. But there are glimpses of hope – Nanna Purvis, who underneath her hard exterior is full of love, and Tanya’s best friend Angela and her kind and loving (if possibly criminal!) family.

The author obviously knows her setting well and there’s a real sense of time and place with little details about food, TV and fashion giving the realistic touches that make this novel so authentic.

A well-executed book about family, relationships and the extraordinary things that can happen in ordinary lives.