I read this as part of the David Bowie Reading Challenge. 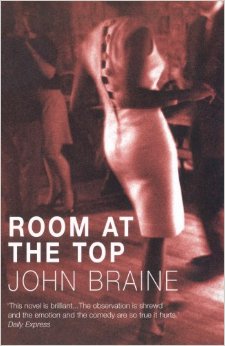 The Angry Young Men movement, featuring such stars as Kingsley Amis, is perfectly illustrated through the iconic figure of Joe Lampton.

The ruthlessly ambitious Joe Lampton rises swiftly from the petty bureaucracy of local government into the unfamiliar world of inherited wealth, fast cars and glamorous women.

But the price of success is high, and betrayal and tragedy strike as Joe pursues his goals.

I’m very torn about this book. On the one hand, Joe’s frustration at the hand he has been dealt in life simply by the consequences of his birth is very easy to empathise with. He comes from a poor background, a dead-end town with no prospects and he wants to get on, to have the things that the middle and upper classes have.

On the other hand, I don’t feel this book has aged well – particularly in terms of the way the women are portrayed.

Joe is ambitious, and he moves to the middle-class town of Warley to take up a new job and to experience life and what it has to offer away from Dufton.

Joe seems to genuinely love Alice, but his feelings for Susan are mixed up with his desire to get to the top. He is using her and this is where the book loses its appeal for me.

I do understand that it is of its time, but still the portrayal of the female characters didn’t work for me. Alice is supposedly independent, intelligent and unconventional, yet she still allows Joe to treat her badly, is still needy. And Susan felt like a caricature of a young girl – whiny and spoilt and childish. She may well have these characteristics, but she would have worked better had she had some redeeming features.

It is an undoubtedly well-crafted and important book, and one that is significant in the Angry Young Men Movement. I’m glad I read it, but I can’t say that I enjoyed it.