The last weekend in January, Gary and I went to Paris – the realisation of a dream I’ve had for more years than I care to remember. I don’t know why it took so long to get there, but I wish I hadn’t waited. What a fabulous city it is.

I was desperate to visit the home of Eugene Delacroix, the artist around whose painting ‘The Death of Sardanapalus’ my WIP revolves. Of course, I wanted to see the painting itself, hanging in the Louvre, and also wanted to visit his grave, at Pere Lachaise cemetery (where Jim Morrison is also buried, so Gary was happy!).

We stayed in the Left Bank, the art district, so it was a short stroll to the Musée National Eugene Delacroix in the Rue de Furstenberg where Delacroix lived from 1857 until his death in 1863. 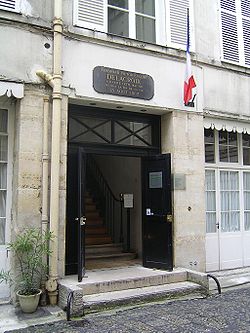 It was a very strange feeling walking through the rooms where Delacroix lived and worked and eventually died. The museum is wonderful – thoughtfully and lovingly designed, with artefacts and objects that belonged to the man himself and many artworks too. The garden at the back of the building has been recreated to include many of the plants and trees he loved and would have grown there. It is so peaceful in the little walled garden – the centre of Paris, but calm and tranquil. It was easy to imagine Delacroix walking there. The garden is the setting for one of the scenes in my book and actually being there was so much more inspiring than looking at photographs.

We went to the Louvre next, and straight to the Delacroix paintings. There are several of his works there. I have seen some at an exhibition at the National Gallery, but not ‘The Death of Sardanapalus’ itself. It is truly a magnificent painting. We sat there, just looking, for ages, really taking it in.

We did go on to look at the Mona Lisa, because you do feel you have to. There was quite a queue, which we didn’t join, we just looked at it from across the room. To be honest, it wasn’t very inspiring. There are wonderful things in the Louvre, amazing paintings and sculptures, and so many people were walking past these lovely, irreplaceable works to take a selfie with this tiny painting. I do think Leonardo himself would be pretty annoyed to think that that’s the thing people associate him with. It seems to have become something to tick off on a list – been there, seen that. 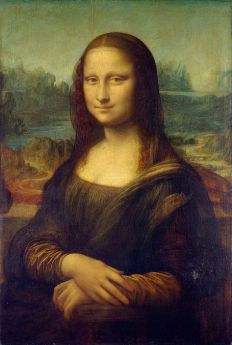 Anyway, we saved the cemetery for our last day in Paris, and the skies were suitably grey. It is a strange place, horribly crowded and a bit confusing. We were armed with a map though and instructions from our daughter who had been there the week before Christmas. We soon found Delacroix’s grave – it is simple, so unlike his paintings, but somehow that seems fitting. After all, how can you really commemorate someone like Delacroix? 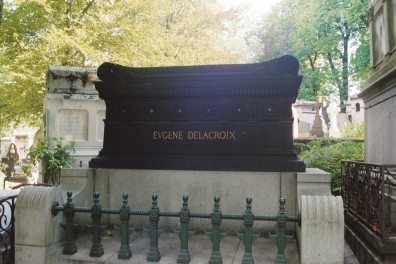 I always find it touching that people leave small gifts at the graves of those that have touched their lives and it was nice to see single flowers left there. It’s always gratifying to know that other people revere and love the people you admire.

There are so many others here, Oscar Wilde, Gertrude Stein, Ingres, Géricault, Balzac, David, Chopin, and of course Jim Morrison, among many, many others. That all these people have Paris as their final resting place is testament to the city itself, vibrant and liberal, intellectual and open, a place where art, music, writing and philosophy have always flourished. In a time when the world seems to be moving to the right, to a political landscape where free thinking, creativity and critical thinking are denigrated and ridiculed, let’s hope it remains that place.