The history of witchcraft and the treatment and persecution of witches throughout the centuries is a subject close to my heart – many of the horrible accounts I read when researching my novel ‘The Black Hours’ have stayed with me. And it always seems pertinent on Halloween to revisit this post. 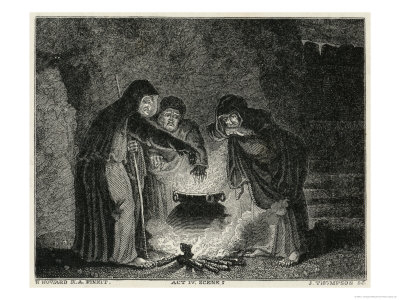 Double, double toil and trouble;
Fire burn and cauldron bubble.
By the pricking of my thumbs,
Something wicked this way comes.

Most of us are familiar with these words from Shakespeare’s Macbeth, and with the gruesome hags that stir the cauldron. They have become the blueprint for the portrayal of witches; ugly, toothless old women; scheming, mysterious and powerful. But is it fair? And why do we see witches in this way – it can’t all be Shakespeare’s fault, can it?

Before the advent of Christianity there were many diverse religions – Druids, Norse Odinists and the witches that had for centuries acted as healers, midwives and wise women and men. However, when the Inquisition was launched, it wasn’t just direct ‘threats’ to the Roman Catholic Church that came under suspicion. Anyone could potentially be accused of heresy, and many of those healers and wise woman came under attack.

Propaganda was a big part of this religious war. The inquisitors sought to portray witches as evil, ugly, dirty devil-worshippers, as these images show:

This left anyone who didn’t conform open to attack – if you lived by yourself, had a wart on your nose, a deformed leg or a harelip – then watch out! You were probably a witch. The majority of those arrested, tortured, tried, condemned and murdered were not witches; real witches had taken their religion underground.

Of course real witches are nothing like those pointy-nosed, warty child-cookers of Hansel and Gretel fame and seemingly endless Disney adaptations. But the stereotype lingers, as false today as it was back then. Witches aren’t Satanists, and witchcraft isn’t and never has been Satanism. In fact, witchcraft in ancient times was ‘the craft of the wise’. It is a spiritual system that teaches respect for the earth. Witchcraft is also referred to as Wicca, the term most often used today. It is a religion, based on a respect for the earth, and the worship of a creator that is both male and female – Goddess and God. Wiccans believe the creator is in everything – the trees, rain, the sea and all other creatures, and this belief fosters a respect and a caring for the natural world and for all life. Wiccans celebrate the changing of the seasons, and the phases of the moon. They are still healers; using natural remedies, and their spells are for harmony, love, creativity, wisdom and healing. Isn’t it time witches were given the respect that we give others? After all, we speak a lot of tolerance for religion and beliefs and yet don’t allow this most ancient of religions any respect at all.

And as a little antidote to these images, here’s a rather beautiful portrayal of a witch, strangely enough from an ad for Pears soap!