I read Angela Carter’s ‘Nights at the circus’ as part of the David Bowie reading challenge that I discovered on the fabulous Scatterbooker blog. 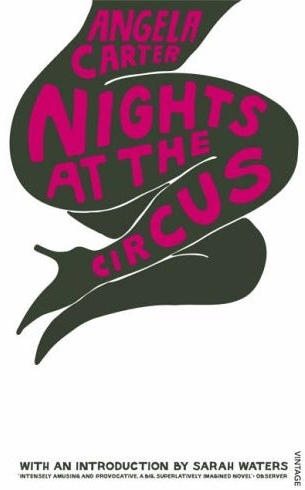 Courted by the Prince of Wales and painted by Toulouse-Lautrec, she is an aerialiste extraordinaire and star of Colonel Kearney’s circus. She is also part woman, part swan. Jack Walser, an American journalist, is on a quest to discover the truth behind her identity. Dazzled by his love for her, and desperate for the scoop of a lifetime, Walser has no choice but to join the circus on its magical tour through turn-of-the-nineteenth-century London, St Petersburg and Siberia.

My goodness – what a fabulous lead character Carter has given us in Fevvers. Half woman, half swan, Sophie is the star of Colonel Kearney’s circus, travelling across the globe, followed by the enamoured journalist Walser, who becomes a clown in order to join her on her travels.

It’s hard to summarise this story – so I won’t even try. This book doesn’t follow a traditional structure but that doesn’t mean it’s hard to read. On the contrary, it’s enormously entertaining.

The settings are described vividly, magically, beautifully. The cast of characters are fantastically drawn – I have a particular soft-spot for Lizzie, Fevvers’ ‘mother’, closet activist, her magic handbag able to conjure any remedy for any occasion and as intriguing and delightful as Fevvers herself. Mignon, Samson, the Princess of Abyssinia, Buffo the Great and the wonderful Sybil the pig are all brought to life effortlessly. Their stories are a joy to read and their narratives intertwine with Sophie’s own story flawlessly.

The writing is assured, clever without being pretentious, lyrical in places. It’s a book I’ll remember for a long time – unforgettable, colourful, and chaotic. A masterpiece.