As books and David Bowie are two of the greatest loves of my life, I’m trying very hard to complete the David Bowie reading challenge that I discovered on the fabulous Scatterbooker blog. It’s a great list, eclectic and intriguing, and there are lots of books there that I read years ago or that have been on my ‘I really must get round to reading this’ list of books for years. One of the best and the most memorable and a book that I really believe everyone should read is George Orwell’s absolute masterpiece, ‘1984’. 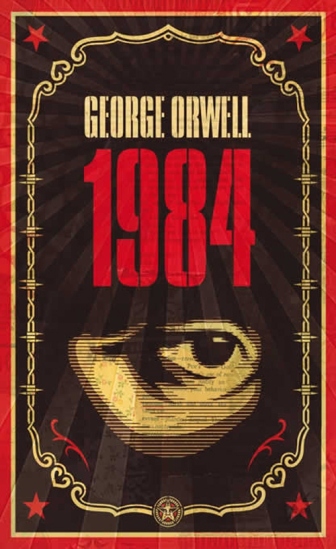 Hidden away in the Record Department of the sprawling Ministry of Truth, Winston Smith skilfully rewrites the past to suit the needs of the Party. Yet he inwardly rebels against the totalitarian world he lives in, which demands absolute obedience and controls him through the all-seeing telescreens and the watchful eye of Big Brother, symbolic head of the Party. In his longing for truth and liberty, Smith begins a secret love affair with a fellow-worker Julia, but soon discovers the true price of freedom is betrayal.

There’s a reason that this classic appears on so many ‘must read’ lists. It is truly a masterpiece. And the themes it tackles are as relevant today as they ever were. I read it first when I was in my late teens, angry at the world (I still am!) and looking for answers (I’m beginning to think there aren’t any) and this was a revelation. Re-reading it all these years later, I was struck by how it rings true today and was completely inspired and awed by Orwell’s foresight, his intelligence and his skill as a writer. There isn’t much to say about this book that hasn’t been said before, so I’m going to let the experts convince you:

“”Nineteen Eighty-Four is a remarkable book; as a virtuoso literary performance it has a sustained brilliance that has rarely been matched in other works of its genre…It is as timely as the label on a poison bottle.” -“New York Herald Tribune

“A profound, terrifying, and wholly fascinating book…Orwell’s theory of power is developed brilliantly.” -“The New Yorker

“A book that goes through the reader like an east wind, cracking the skin…Such are the originality, the suspense, the speed of writing, and withering indignation that it is impossible to put the book down.” -V. S. Pritchett

“Orwell’s novel escorts us so quietly, so directly, and so dramatically from our own day to the fate which may be ours in the future, that the experience is a blood-chilling one.” -“Saturday Review

I certainly can’t put it better than any of these more qualified and competent critics, so I won’t try. All I’ll say is that I agree whole-heartedly with them all, and I urge you to read this wonderful, terrifying, heartbreaking, and totally relevant book.