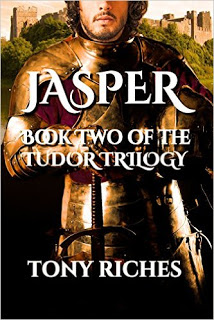 England 1461: The young King Edward of York has taken the country by force from King Henry VI of Lancaster. Sir Jasper Tudor, Earl of Pembroke, flees the massacre of his Welsh army at the Battle of Mortimer’s Cross and plans a rebellion to return his half-brother King Henry to the throne.
When King Henry is imprisoned by Edward in the Tower of London and murdered, Jasper escapes to Brittany with his young nephew, Henry Tudor. Then after the sudden death of King Edward and the mysterious disappearance of his sons, a new king, Edward’s brother Richard III takes the English Throne. With nothing but his wits and charm, Jasper sees his chance to make young Henry Tudor king with a daring and reckless invasion of England.
Set in the often brutal world of fifteenth century England, Wales, Scotland, France, Burgundy and Brittany, during the Wars of the Roses, this fast-paced story is one of courage and adventure, love and belief in the destiny of the Tudors.

I love well-written fiction that’s based on actual historical events and people. Bringing these characters to life in an interesting and entertaining way while still maintaining historical accuracy is a difficult balance, but Tony Riches does this brilliantly. It’s no mean feat to research as thoroughly as Riches obviously has for this book, and then to turn that research into a gripping and engaging tale. The past is really brought to life.

I very much enjoyed the first in this trilogy, so was really looking forward to this novel. It doesn’t disappoint. The characterisation works really well, the writing is skilful and, for the most part, technically flawless (a few issues with tense at times, but nothing that really spoiled the reading experience), and the passion the author has for history comes across in the way that history is portrayed.

My only issue was that, as I don’t know a great deal about this period, I was sometimes a bit confused as to who was who and what their relationships to each other were. To be honest though, I’m not really sure what Riches could do to make this clearer, and possibly in a book that covers so much intrigue and differing alliances and allegiances, this is just how it has to be. These were complicated times, and Riches can’t change history! He does a very good job of writing it though.