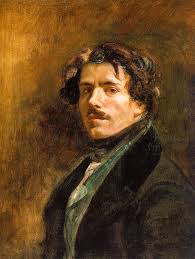 Researching my new WIP, I’ve been reading the selected letters of Eugène Delacroix.

Delacroix was a rather controversial 19th Century artist. His painting invoked strong reactions for their use of bold colour and for his refusal to conform to the ideas of the day. I think that’s why I like him so much. He’s pretty hard to research however, despite the fact that he is regarded as the father of the French Romantic movement.

These letters then are indispensable and a godsend. They are also entertaining, intelligent, beautifully written (and translated) and hugely insightful. Without them, I would be at rather a loss to put any flesh on the bones of the man whose paintings I so admire.

The letters that are relevant to the period I am researching, when Delacroix was a young man, are written to friends and family. They contain within them clues to Delacroix’s passions, his values, his admiration for his close friends and hints of the rather strained relationship he had with his sister. But what if Delacroix was alive today? How would I find out what makes him tick?

Well, you could argue that it would be a lot easier. That I would just have to look at his Twitter account or Google him to find out the latest gossip, or read interviews in magazines or on websites. But would that give me a true picture? I somehow doubt it. Here, in these personal letters, we have something precious – a real insight into a man that many consider a genius. For today’s artists, musicians, actors and celebrities, what we usually get is a PR approved, carefully constructed, watered-down version of a personality, a life that the artist (or their management company) wants you to see. Yes, we might get to read an autobiography (but this would be run through the usual PR checks), we might read on Twitter what they had for breakfast, but is that a real insight?

And it’s not just in the area of celebrity that something has been lost. The art of writing letters is lost to us on the whole. We write quick emails, tweet or text each other. We don’t sit down and write to each other about our feelings, our ambitions, our desires and our disappointments as Delacroix did. Even our moments of the greatest grief or the greatest joy are now more often posted on Facebook. I’ve seen people ‘share’ the loss of a parent in a post and the response has been a range of sad emoticons. That takes a few seconds. Compare that to Delacroix’s letter to his great friend J.B. Pierret, written after the death of Perret’s father. The letter is awash with empathy, with sympathy, with real feeling, real concern and real emotion. How much more comfort would that give than a ‘sad face’?

I’m not one of those people who think that everything was better in the past – far from it. But I do think in this age where everything is quick, everything is automated, our responses have become automated too. And I do think we’re the poorer for that.