I’m so pleased to have the lovely writer and blogger Barb Taub on my blog today to tell you about herself, and about the wonderful way she is raising funds for animals this holiday season. Barb says:

In honor of this holiday season, my publisher, Hartwood Publishing, is offering a special gift package of my urban fantasy Null City stories. Not only are they releasing the two newest stories as a $0.99 set called Tales From Null City, but my holiday-themed Don’t Touch will also be available at the sale price of $0.99. (£0.72 in UK)

In most of my stories, an animal companion plays a prominent role—from George, the grumpy cat in Don’t Touch, to Bygul, the bitchy feline goddess of Payback is a Witch. My own life has been immeasurably enriched by my dog Peri who came from a shelter in eastern Washington State, and by the friends (feline, canine, and the occasional rodent) who have joined our family over the years after being rescued by the dedicated members of many shelters.

In thanks, therefore, all royalties from sales between now and January 1, 2015 from Don’t Touch as well as the newly released set (Payback is a Witch and Just for the Spell of It) will be donated to the following wonderful organizations:

As the owner of two dogs myself, I can’t think of a better cause. Our dogs are definitely part of our family. We lost our gorgeous cocker spaniel Honey over a year ago and still miss her every day.

We rescued kind-of-labrador Daisy two days before the breeder was going to shoot her – she has turned into the most gentle, calm, beautiful dog you could wish for. The latest addition is a beautiful cocker spaniel, Belle (for my daughter’s 16th birthday – although she seems to forget the puppy is hers when it’s pouring with rain or she’s peed on the floor – the dog not my daughter). 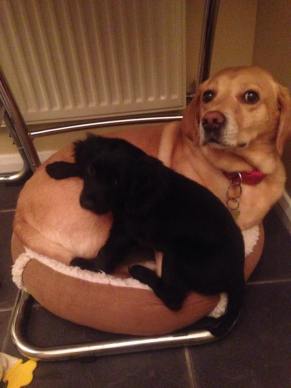 Daisy and Belle
‘Because the cat’s bed is so much more comfortable than our own!’

Our dogs (and our rescue cat Milo) have and had wonderful lives, and wonderful Christmases. It would be lovely to help other animals to have just a little bit of that love.

Anyway, enough about my dogs (yes, I am slightly obsessed with them) – I’m sure you’d love to know more about Barb and her books:

Barb and her dog Peri

Tell me a little about your writing history/background. What inspired you to write?

Writing is verbal alchemy, so it’s my happy place, where I’m the sorceress who converts the dross of unused disk space into a whole world of golden prose. (Of course, that only lasts until I type the words “The End”. Then, into the happy place’s den comes Doubt, the sorceress’ embarrassing, obnoxious brother-in-law who sits on the couch drinking her beer, making body noises, and dropping offhand remarks about how the sorceress should keep her day job.)

How did you come up with the title of your series?

My daughter and I have this tiny little life-altering addiction to superhero movies. One night we started talking about superheroes with awkward powers. Let’s say you are the Man of Steel, but you don’t dare have sex with Lois Lane because your Little Man of Steel would probably split her in two. (And we’re not even going to discuss the havoc your Swimmers of Steel could wreck on Woman of Pasta…)

The point is that when you think about it, most people with special powers would be lining up to get rid of them and get their normal lives back. That’s where Null City comes in. After one day there, those with extra gifts turn into their closest human counterparts. Imps, for example, become baristas. (Of course, they’re now ex-PhD candidates in literature or classics who claim to be experts on third-world coffee blends and obscure world music groups. But hey – there is only so close to human that hellspawn can get…)

So the idea of Null City is that it takes our fantasy worlds and turns them into normal life. My daughter Hannah (aka obsessive cowriter) and I talked about Null City for her last year of high school. The one thing we couldn’t figure out was who the villain would be, when everyone is a hero. The problem with heroes, though, is that they don’t all have the same goals. What if each group – angels, superheroes, and just plain humans – is willing to do whatever it takes to make their right thing happen? So Hannah headed off to University in Scotland and I headed to my computer. One year and many hours of video chats later, the first Null City book, One Way Fare, was published by Taliesin (now Hartwood). Its backstory is the founding of Null City. In the second book, Don’t Touch, the backstory is the Metro train, Null City’s connection with the outside world.

What is the hardest part of writing for you?

Editing. I tell the words I’m cutting that it’s not them, it’s me. They are perfect, beautiful jewels and I’m going to place them in a special file (“Dead Kittens”) until I can come up with exactly the right place for them to shine when the day comes for me to use them again. [NOTE: any woman who has old bridesmaids dresses in the back of her closet because she was told she could “cut them off and wear them to parties later” will understand how I can say this with perfect sincerity…]

I’m finishing up Book three, Round Trip Fare, which explores what happens when saving Null City means destroying the ones you love.

As a reader, nothing pulls me out of a story faster than seeing spelling and grammar errors. As a book reviewer, I’ve gotten to the point were I won’t look at something unless it’s been professionally edited. Their are so many people who seem to think they’re words are so perfect, there unwilling to consider what a good editor can bring. (See? I could barely stand to write that, and I certainly wouldn’t be able to read it.)

Who is your favourite author and what is it that you love about their work?

That changes constantly. When I have the flu, it’s an old friend like L. M. Montgomery’s Anne of Green Gables series because it’s so soothing to grow up and old along with Anne. For fun I love the humour and breezy read of Molly Harper’s southern vampires. And the writing team behind Ilona Andrews simply could release the updated Muncie Indiana phone book and I’d have it on my preorder list.

Who would you choose to have over for dinner and why?

I usually answer this with a lofty and intellectual dinner party list. But maybe because it’s the holidays, I have to admit the truth. I’m looking forward to holiday dinner with my family. Because we’re all writers, the conversation is usually amazing. My husband is a theoretical economist, one daughter is a human rights attorney who does commentary for Vox, another daughter is a humourist who writes for Funny or Die, and the youngest is my co-author on the first Null City book and my toughest critic.

Desert Island Books – what five books would you choose to have with you if you were stranded on a desert island?

Thanks Barb for taking the time to visit my blog- I’ll be welcoming Barb again on Friday when she’ll be telling me all about the villain of ‘Don’t Touch’ – the Krampus. In the meantime, do check out this very special offer, remember all royalties from sales between now and January 1, 2015 from Don’t Touch as well as the newly released set (Payback is a Witch and Just for the Spell of It) will be donated to No Kill Advocacy Center and DogsTrust.