Basingstoke. A town known for many things – its roundabouts, its housing estates, and, more recently, its not so contrite local MP, Maria Miller. These seem to be the things that spring to mind if you question those who don’t know the town. They don’t often mention the beautiful surrounding countryside, the historic old town or the subject of the town’s most horrible, yet most gripping tale, the unfortunate Mrs Blunden.

This poor lady lived in the town in the seventeenth century, the wife of a successful local malt merchant. During the hot summer of 1674, her husband was away on business in London. One evening Mrs Blunden, by all accounts a rather large lady, was feeling unwell.  For some reason, no-one seems to know exactly why, she drank a huge quantity of poppy water acquired from a local apothecary. One account blames her maid, who gave her the water accidently when she asked for wine; other reports suggest that Mrs Blunden took the water as a curative. Whatever the reason, having drunk the water, she apparently dropped dead.

Her body was laid out, and a messenger was sent to her husband. He requested that she not be buried until he had returned home. However, due to the size of the woman, and the heat, it was feared that she would soon begin to smell. She was, therefore, placed in a coffin that was nailed shut.  She was then buried at the Liten burial ground near to the Holy Ghost Chapel. 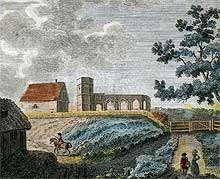 These burial grounds were used as a playground by boys attending the Queen’s school. Some of the boys thought they heard noises coming from the grave and went to tell the School Master. At first he didn’t believe them, but when other children also claimed to have heard noises, the grave was eventually opened. It was too late to do anything for the unfortunate woman. She had clearly been alive when she had been buried as her body was covered in self-inflicted wounds, caused by her struggles on regaining consciousness. This is terrible in itself, but the horror doesn’t stop there.

Mrs Blunden’s coffin was re-sealed and placed back in the grave to await the coroner who was due the following day. A guard was posted, but he must have been distracted, fallen asleep or left his post, for, when the grave was re-opened, poor Mrs Blunden was covered in fresh wounds. Her shroud was torn, her fingernails bloody and, some reports claim, her mouth bleeding, presumably from chewing at herself in her distress.

So the unlucky Mrs Blunden had the bad luck to be buried alive not once, but twice.

The ruins of the Holy Ghost Chapel can still be visited today.