If you’re reading this, the chances are you’re thinking of self-publishing. You’ve spent hours writing. You’re proud of your work, but nervous about how it will be received. You’ve spent time revising and polishing when you could have been doing other things. You’ve already paid out for a professionally designed book cover. You really need to start making some money on this project. So you don’t need the extra expense of an editor do you? Well, yes, you probably do.

You’ve written your masterpiece. You’ve had family and friends read it; they’ve pointed out a few typos but have told you it’s wonderful and that you should publish. So that’s what you do next, right? Well, possibly. If your friends and family are completely impartial and will tell you the honest truth. And if you are completely sure that you’ve managed to catch every typo and grammatical error in your copy. And if you’re one hundred per cent sure that there’s nothing that can be improved, corrected and enhanced by a completely impartial, professional eye. By someone who edits as their job and whose reputation depends on how well they do that job.

You need an editor because you won’t catch every error. You will be so close to your words, so familiar with them that your eyes will pass over mistakes like typos and missing words. Your brain will read what it expects to read. You need the fresh eye of an impartial editor to break this cycle, to read what is actually there.

This closeness also means that, not only will you not see all the typos and grammatical errors (and there will be lots of those), but you will be too invested in your work to see it impartially. You know your characters and your plot inside out. You know the sequence of events and why and how things happen. And this is where the problem lies. You can’t ‘un-know’ all of that, so you can’t see the flaws in plot, in structure, in characterisation. You can’t read your book from beginning to end the way a reader will. And if there are flaws and inconsistencies, if there is more than the odd typo, then your readers, if you publish without having had a thorough edit, will be happy to point them out in reviews.

I’m a self-published author. I understand how attached you are to your work. I know how horrible it is to send that work to someone else and have them criticise it, however constructively. However, I also know that this process is far less painful than sending your precious work out there, warts and all, to have those warts picked over by readers and reviewers.

I am a UK-based writer, editor and independent novelist. I love reading and I love to write. These are the two great passions of my life. Find out more about my editing services here. I am currently offering discounts to new clients – do get in touch to discuss how I can help you to make your book the best it can be. You can contact me here.

Double, double toil and trouble;
Fire burn and cauldron bubble.
By the pricking of my thumbs,
Something wicked this way comes.

Most of us are familiar with these words from Shakespeare’s Macbeth, and with the gruesome hags that stir the cauldron. They have become the blueprint for the portrayal of witches; ugly, toothless old women; scheming, mysterious and powerful. But is it fair? And why do we see witches in this way – it can’t all be Shakespeare’s fault, can it?

Before the advent of Christianity there were many diverse religions – Druids, Norse Odinists and the witches that had for centuries acted as healers, midwives and wise women and men. However, when the Inquisition was launched, it wasn’t just direct ‘threats’ to the Roman Catholic Church that came under suspicion. Anyone could potentially be accused of heresy, and many of those healers and wise woman came under attack.

Propaganda was a big part of this religious war. The inquisitors sought to portray witches as evil, ugly, dirty, devil-worshippers as these images show: 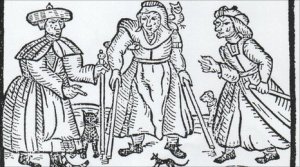 This left anyone who didn’t conform open to attack – if you lived by yourself, had a wart on your nose or a deformed leg – then watch out! You were probably a witch. The majority of those arrested, tortured, tried, condemned and murdered were not witches; real witches had taken their religion underground.

Of course real witches are nothing like those pointy-nosed, warty child-cookers of Hansel and Gretel fame and seemingly endless Disney adaptations. But the stereotype lingers, as false today as it was back then. Witches aren’t Satanists, and witchcraft isn’t and never has been Satanism. In fact, witchcraft in ancient times was ‘the craft of the wise’. It is a spiritual system that teaches respect for the earth. Witchcraft is also referred to as Wicca, the term most often used today. It is a religion, based on  respect for the earth, and the worship of a creator that is both male and female – Goddess and God. Wiccans believe the creator is in everything – the trees, rain, the sea and all other creatures, and this belief fosters a respect and a caring for the natural world and for all life. Wiccans celebrate the changing of the seasons, and the phases of the moon. They are still healers; using natural remedies, and their spells are for harmony, love, creativity, wisdom and healing. Isn’t it time witches were given the respect that we give others? After all, we speak a lot of tolerance for religion and beliefs and yet don’t allow this most ancient of religions any respect at all.