In a time when death is common, life is cheap and superstition rife, anyone can find their world torn apart by gossip and accusations. Can one lonely girl find the love and companionship she craves? Or will her heart lead her into more danger than she can imagine?

Lizzie Prentice, daughter of a cunning woman, is no stranger to scandal. She carries it with her, like the scar on her forehead. Samuel Pendle, her protector since childhood, could hold the key to a normal, safe life. But when Samuel defies his parents, it seems that history is bound to repeat itself and Lizzie’s life is at risk.

‘Blackwater’, prequel to the historical novel ‘The Black Hours’, follows Lizzie as she strives to escape the same terrible fate her parents suffered; her life thrown into turmoil, and everything she holds dear at stake, but determined to find happiness  in a world of intolerance, cruelty and hate. 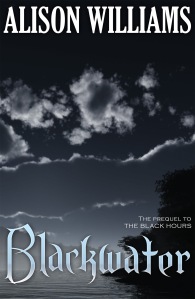 ‘Blackwater’ is out now and is free to download from the Smashwords site. You can find it here. Unfortunately, Amazon doesn’t allow independent authors to list books for free, so it is priced at 75p or 0.99c here. I am hoping that Amazon will price match it and that it will soon be free on their site too.

Here is an excerpt to whet your appetite!

Lizzie could feel the scar under her fingers. It began just below her hairline and stretched in a puckered ridge to the edge of her left eyebrow, the flesh uneven beneath her touch. Although she had rarely seen the scar herself, she knew from the averted eyes of others that it had not much faded; that, even after seven years it still marred her young face, whatever her mother might say. She pulled at a lock of yellow hair now, arranging it over the ruined skin. Her mother was watching from the hearth.

‘Leave it now, Lizzie. We need to go. I know it’s not a long walk to Finchampstead, but I do want to get there early.’

Lizzie turned and tried to smile, though her mother’s words made her heart heavy.

‘I’m ready, Mother.’ She paused, pursing her lips. ‘Although, must we go? It will be so busy. You know how it will be. All those people pushing and shoving at each other to get the best view. It’s horrible.’

Maggie sighed. Walking over to Lizzie, she tucked some loose strands of hair behind the girl’s ear.

‘Lizzie, I know you hate it but we have talked about this. You need to think of those women. Think how afraid they must be today. Stepping out into that jeering and shouting to meet their deaths. And not one look of kindness to fall on their poor heads. Not one bit of comfort. Would you deny them that? We must be there.’

Lizzie nodded, ashamed of her selfishness.

‘I’m sorry. It’s just that I hate the staring. The whispers behind our backs. And I hate to see their suffering.’

‘I know you do, but you know, it’s something you will get used to. If you are to follow me in my work. Don’t be ashamed of what we do. There are many women in these parts grateful to me for their very lives. You know that from the gifts left on the doorstep! Now stop fiddling with your hair. The scar is not as bad as you think it. And besides, if it was twice as big and twice as red, you’d still be the most beautiful girl in Eversley!’

The women stepped out of the cottage into the bright sunlight. It was unseasonably warm and the weather had encouraged plenty of spectators who now thronged the narrow lane despite the early hour, all making their way to the scene of the executions. Lizzie could never understand the fascination of these people for the spectacle of death. Her mother had made her attend executions as soon as she had been old enough, although what age was suitable to witness that horrible sight, Lizzie didn’t know. But Maggie’s reasons for attending were far removed from those of these other early travellers. Lizzie had witnessed it far more often than she cared to remember. The villagers treated these occasions as holidays. They wore their best clothes and thought nothing of bringing their children along, some mere babes in arms. They happily bought refreshments from vendors who did a brisk trade both before and after the executions. There seemed to be no compassion for the poor souls who would be the focus of the spectacle. Lizzie scowled as she was jostled by a large woman, striding along the lane with her children in tow.

‘I can’t understand how they bring their children with them. Or why they come at all for that matter.’

‘Their lives are dull, Lizzie, and this is a bit of excitement.’

‘The deaths of their neighbours? Of those they have known all their lives? It is bad enough they have accused their friends, without enjoying their murders.’

‘Be careful, keep your voice down. You know how it is, we have discussed it often enough. These people are poor, their lives are hard. When things go wrong, as they do so often, they look for someone to blame.’

‘But why blame those who have helped them in the past? The people who have given them cures, helped them when they were desperate?’

Her mother shook her head, her eyes sad. Lizzie knew that Maggie herself had suffered suspicion and persecution all her life.

‘Because they are scared. Because it is easy to turn on those who don’t fit in, who are different.’

Lizzie felt a shiver of fear.

‘You know Lizzie, I have spent my life working with the plants of the earth, using those things that nature has been kind enough to give us, to help us if we only open our eyes and know where to look. And, yes, I have been shunned by some; have even been accused by others of terrible things.’ She paused, a shadow darkening her face. ‘You know it has not been easy. Moving around from place to place.’

Lizzie nodded. They had indeed moved at least five or six times before coming to Eversley when Lizzie was seven. They were lucky to have been able to stay here for as long as they had. In those years, Lizzie had seen the good that Maggie did, witnessed the gratitude of those helped in their most desperate times, and when she had been allowed to assist Maggie in that most wonderful feat of nature, aiding at the births of so many babies, she had known that, despite the danger, the work they did, the work that she would continue, was worthwhile and right. Even when they heard horrible tales of women like them, accused, frightened, tortured and eventually led to their deaths at the noose, she knew that she would carry on Maggie’s work – it was what she was born to do. So now, in the midst of these excited crowds, who would soon cheer as those poor women swung from the ropes, she tried to be brave, tried to ready herself to bring some small comfort to them in their hour of need. For in the back of her mind was the knowledge that one day she might have need of that same fellow feeling, that same small comfort, if suspicion and fear ever came knocking at her door.