Nestled in the lovely village of Boscastle on the Cornish coast in a pretty white cottage is the wonderful Museum of Witchcraft. Step inside this quaint little building and you will find the world’s largest collection of witchcraft related artefacts.

The museum was opened in 1960 by Cecil Williamson, after a rather troubled history. Williamson had first opened a museum on the Isle of Man in 1951, the year in which the Witchcraft Act was repelled. The museum had a resident witch – Gerald Gardner. The two men wanted different things for the museum, so Williamson sold the building to Gardner in 1954 and moved on to Windsor and then to Bourton-in-the-Water in the Cotswolds. Unfortunately, the museum was not welcomed – Williamson received death threats and the museum was fire-bombed several times. Eventually he moved the artefacts to their current home in Cornwall.

This was not the end of the troubles. In 2004 Boscastle was hit by flooding. The ground floor of the museum was filled with two metres of sewage, and walls were damaged. However, after months of painstaking salvaging, cleaning, restoration and rebuilding walls the museum reopened its doors. The flood line is marked on the walls for visitors to see.

The museum includes a display of images of witches. We have come to imagine witches as ugly old hags, toothless and covered in warts, cackling as they ride their broomsticks or stir frogs and newts into cauldrons. But the images on display in Boscastle have a different story to tell.  Alongside these ‘traditional’ images there are beautiful images of witches as seductive and mysterious, and some really interesting examples of witches used in advertising like this one for Pears soap: 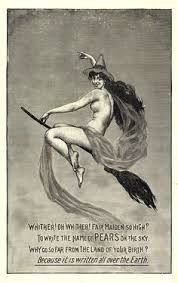 The display concerning the witch hunts was obviously hugely interesting for me, and extremely poignant. The horribly lengthy list of names of those persecuted is chilling; a stark reminder of the real lives that were caught up in the hysteria that swept through Europe, resulting in the murder of so many innocent people.

But this museum is not just a place of horror, torture and persecution, although there is plenty of that. The museum also has information and artefacts relating to sacred sites, the magic of Christianity, wise women and herbs and healing, protection magic, curses and divination. I found it really interesting to find out about how the pagan rituals and beliefs of early society were incorporated into Christian festivals – a very clever way of ensuring that the original beliefs were stamped out.

There is so much to discover at the museum that it is impossible to describe it all here. It is definitely well worth a visit. Details of opening times and admission prices can be found on the website here. 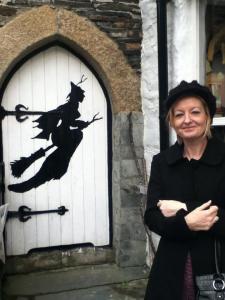